This Is Not a Dark Ride. 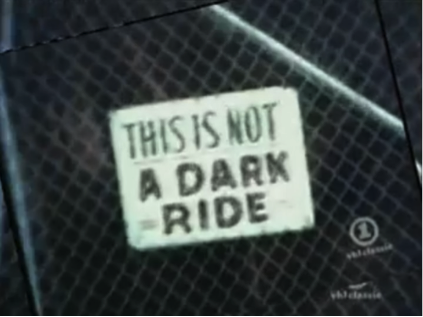 And the love we're talking here - from The Four Loves - is that of Agape, the all-encompassing love that is boundless and unconditional.

Like God's Grace, there is love that is all-encompassing.

Except for those who claim in the name of God to deny such love, to set conditions and rules and punishments out of hate and fear.

Such as those who currently run the state of North Carolina. There this past month, the state legislature and Governor plotted out a new law HB2 - that they brought up for vote in record time, so fast that it made it impossible for opponents to rally against it - that bans cities from passing their own non-discrimination ordinances, and from allowing transgendered persons from using the bathrooms of their current identity, and forces TG people to use the bathrooms of their biological birth.

Just to ask, has there been a wave of bathroom related assaults committed by transgenders vs. normative genders over the last two/ten/twenty years? I really want to know, because God help me I haven't heard a single case.

Oh, and the worker-hating wingnuts added a provision blocking cities from raising their own minimum wage levels. Just so the state could screw the working poor as well as gays, transgenders, and all other minorities.

There is no Love of People in what North Carolina's elected leaders did. There is no acceptance, there is no awareness, there is no civility. This anti-gender law that got signed in record time (less than a day) is a law based on Fear, based on Hate, based on Lies.

It is a law nearly impossible to enforce. Cops and security guards in public places don't have the time or resources to stand guard at the bathrooms every minute of the day. All over something that would really only affect a handful - hundreds of residents out of millions - of people. And we're talking about a law that would require any person in the state - even tourists - to have on hand their own official birth certificate (should that be laminated and folded to wallet size, Governor McCrory?). This is insane.

The response to this madness has been loud and growing. Businesses are beginning to shut down plans for new offices or expansions that would generate new jobs and more state revenues. Cities outside of the state are telling employees to avoid travel, and cancel out any conventions or business trips to North Carolina. Calls for boycotts grow by the day.

And with Bruce Springsteen's announcement to cancel a scheduled concert there, major artists are starting to go public against the law as well.

As you, my fans, know I’m scheduled to play in Greensboro, North Carolina this Sunday. As we also know, North Carolina has just passed HB2, which the media are referring to as the “bathroom” law. HB2 — known officially as the Public Facilities Privacy and Security Act — dictates which bathrooms transgender people are permitted to use. Just as important, the law also attacks the rights of LGBT citizens to sue when their human rights are violated in the workplace. No other group of North Carolinians faces such a burden. To my mind, it’s an attempt by people who cannot stand the progress our country has made in recognizing the human rights of all of our citizens to overturn that progress. Right now, there are many groups, businesses, and individuals in North Carolina working to oppose and overcome these negative developments. Taking all of this into account, I feel that this is a time for me and the band to show solidarity for those freedom fighters. As a result, and with deepest apologies to our dedicated fans in Greensboro, we have canceled our show scheduled for Sunday, April 10th. Some things are more important than a rock show and this fight against prejudice and bigotry — which is happening as I write — is one of them. It is the strongest means I have for raising my voice in opposition to those who continue to push us backwards instead of forwards.


Springsteen has been a visible Progressive for most of his career: usually speaking up for Veterans, world peace, Unions and workers. He's also been a vocal defender of gay rights and his stance here - for both gays and transgenders - is him sticking to his moral convictions. He's showing his Love for people, Love for others as much as his Love for brothers (the Phileo he's shown to band-mates like the Big Man Clarence Clemons, RIP).

It's obvious a lot of fans who bought tickets for his show - arguably one of the best live performers we have in this nation - are going to be upset. But a lot of his fans have been with him for decades on this trip, and they all know where he stands and why. And as fans, they probably already love him for it. If he's morally outraged by this hideous law, they'll understand.

And they'll likely share that Love. they're hopefully already a major faction within the state's populace standing against this law.

What happens here is that more artists scheduled to perform in North Carolina are going to be asked where they stand, what they will do if they've got concerts on the line in the state - Greensboro, Asheville, Fayetteville, Charlotte, Lumberton - and if they have audiences that are opposed to HB2. This is April: we are getting into the summer months that are the big-ticket months when major tours cross the United States. North Carolina is a big market: will the artists boycott that state, will they play on ignoring the issue, or will they take a third option and use their concert for civil rights Pro-People awareness?

Meanwhile, there are groups you can support. The NAACP hosts Moral Mondays protests as a weekly call to civil disobedience. There's also Equality North Carolina, check them out.

Stay in Grace, people. Keep the Love of People in your heart, and Stand against the Hate.

“We have spent the last 50 years fighting for equality for everyone and these laws are discriminatory which XHamster.com does not tolerate,” he said in an official statement sent to The Huffington Post. “Judging by the stats of what you North Carolinians watch, we feel this punishment is a severe one. We will not standby and pump revenue into a system that promotes this type of garbage..."

Poor North Carolina. Soon the only live entertainment available there will be gospel singers and Ted Nugent.

has there been a wave of bathroom related assaults committed by transgenders vs. normative genders over the last two/ten/twenty years?

Haven't you heard? For centuries there's been a tremendous wave of sexual assaults on kids by men wearing dresses. Oh, wait, I'm thinking of Catholic priests.

pity of it is, the boycotts won't do much to shake these fervent fear-mongers out of their righteousness.

because they are more afraid of their angry voting base turning on them if they show any weakness now.

I just want every registered Dem and every registered Independent voter showing up this November to vote enough of these bastards out of office (they have a governor's race, right?). Every GOP seat needs to be contested this year.