Iran: It's Been A Year

The elections that began the whole brouhaha that ought to lead to Iranian democracy happened last year.

As I've written then and is relevant now:

Now, it's 2009. Ayatollah Khamenei basically calls a questionable election result too early and too eagerly for Ahmadinejad. Even though enough Iranians know among themselves there's no way Ahmad could have won all those provinces so handily, even with widespread reports of ballot box tampering and fraud. Now acting like a bullying teenager caught in a weak lie, Khamenei is threatening violence on anyone who dares question him, and starts acting in a very Shah-like manner with violent arrests, use of acid sprays, the works. Thing is, for all of Khamenei's rhetoric against the Brits, and the Americans, and Zionists and 'foreign interlopers', the Iranian people know that's not really true. There's no evidence the Brits or the Russians or the Americans tampered with the election. It wasn't BBC or Fox News rushing to proclaim Ahmadinejad the winner "by divine will" inside of an hour after the polls closed. This time, the Iranians have no one to blame but their own leaders. And that's why I think the protests are going to continue, because Khamenei is now the target of blame. The violence will get worse, which is the pity of it all, but it's not gonna stop until he's gone.

Keep the good fight going.  Freedom for my peeps.

And make this guy proud. 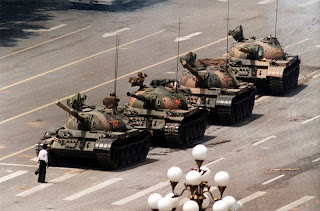 It's his anniversary too.
Posted by Paul W at 10:00 PM No comments: