“Anyway, George comes up to me the first day of filming and he takes on look at the dress and says, 'You can't wear a bra under that dress.'
So, I say, 'Okay, I'll bite. Why?'
And he says, 'Because... there's no underwear in space.'
I promise you this is true, and he says it with such conviction too! Like he had been to space and looked around and he didn't see any bras or panties or briefs anywhere.
Now, George came to my show when it was in Berkeley. He came backstage and explained why you can't wear your brassiere in other galaxies, and I have a sense you will be going to outer space very soon, so here's why you cannot wear your brassiere, per George. So, what happens is you go to space and you become weightless. So far so good, right? But then your body expands??? But your bra doesn't- so you get strangled by your own bra. Now I think that this would make a fantastic obit- so I tell my younger friends that no matter how I go, I want it reported that I drowned in moonlight, strangled by my own bra.”

"Somebody has to save our skins!"

I wrote this bit for TV Tropes' Awesome page for A New Hope: "In that one moment, she utterly demolishes the Damsel In Distress image in favor of being an Action Girl equally participating in her own rescue." Someone's added to it since then, but this part is still up and I'm particularly proud of it.

I already wrote about how bad this year's been for celebrity deaths - oh man, I don't even have time or room to cry over the loss of Richard Adams, author of Watership Down - but I swear to the Old Gods and the New that 2016 should crawl off into a dumpster and fucking set itself on fire. If this year were truly anthropomorphized as a human being, I would be repeatedly punching him in the balls without mercy or regret.

My nephews and I got to see Carrie Fisher speak at the Tampa Bay Comic Con in 2015. She was witty, acerbic, doting over her puppy that she took everywhere with her.

I know that we can't associate the character with the actor, that Leia is fictional to where Carrie Fisher was real. But I'm a sci-fi geek. I grew up to Star Wars, associated to that franchise in a way I haven't related to anything else (maybe X-Files, but not with this level of love or sincerity). In a way, this is Leia dying, at a time when the full epic is still under production and we're waiting on Episode VIII (oh GOD is THAT going to create a wave of tears) and we just saw Leia show up in CGI (kinda painfully, because you could tell it was CGI and not Carrie in excellent de-aging makeup) in Rogue One (and I am tempted to write about that given its cultural and political immediacy).

Princess, Senator, General... Leia was the Rebellion against the Empire, against the darkness of the Sith and the galactic fascism it all represented.

The Fight Continues. This war isn't over until every soul is free.

I Am One With the Force, And the Force Is With Me.

"Hope." - the final line in Rogue One

Addendum: posting again some of the photos I got of Carrie Fisher at the comic con. I apologize but three of them were shaky thus blurry. 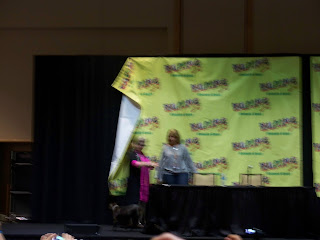 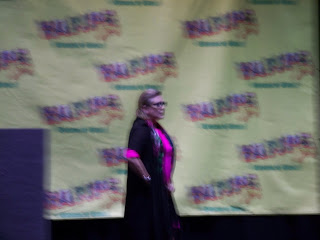 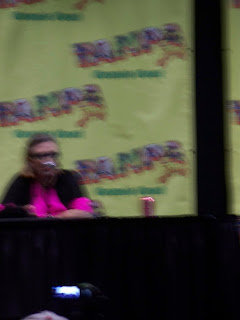 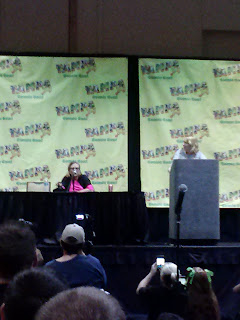 "Then I fall to my knees

I grow weak, I go slack

As if she captured the breath of my

Voice in a bottle

And I can't catch it back"

-From Paul Simon's "She Moves On", a song Carrie Fisher claimed was written about her. "If you can get Paul Simon to write a song about you, do it. Because he is so brilliant at it."