I Have Come to Tampa Bay Comic-Con To Chew Bubblegum And Use The Force... And I Am All Out of Bubblegum

Actually, I got out of the habit of chewing gum back when I had braces in the eighth grade, but hey.

IN MEMORIAM OF ROWDY RODDY PIPER, LET US SPEAK THE IMMORTAL WORDS OF SCI-FI ASS-KICKERY:

In the meantime, here are some lovely pictures of the 2015 Tampa Bay Comic-Con. 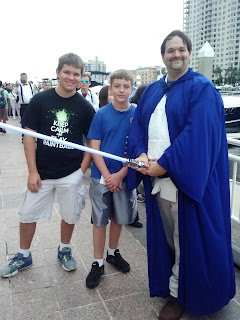 Only this time I kidnapped invited along my nephews.  They had never gone to a comic-book/scifi-fantasy/gaming/geek convention before, so I wanted to show off.  I hope I didn't embarrass them too often.

To note this year, the convention didn't have many panel discussions I wanted to attend.  I asked the nephews but since it was their first visit and they really didn't have a focus on their geekdom - they are gamers and cartoon watchers, with some scifi love thrown in - there wasn't much on their list either.  I decided on sitting in on a celebrity Q&A with Carrie Fisher aka Rebel Princess Leia.  Thing is, previous experience with conventions taught me to show up EARLY for these big-name appearances, and so I got to the pre-line for the line to get in line for the line to join the waiting room area to enter the ballroom to see her.  Next set of photos are all about that: 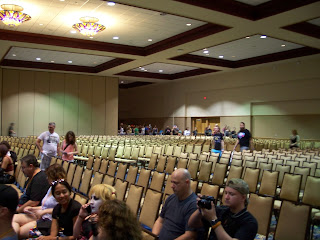 Having been in the front of the pre-line, I was able to get good seats up front.  Here's me looking back at the entrance pre-pre-pre-line with people filing through. 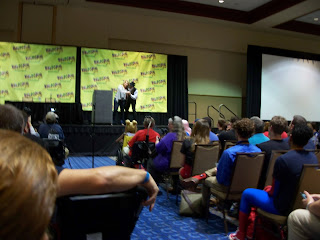 This is how close I got to the stage. 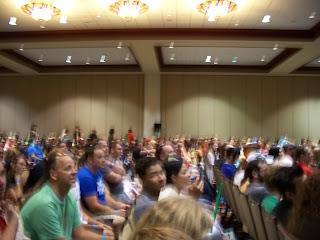 Room is starting to get packed now... 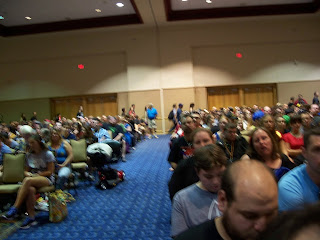 Here's behind where me and the nephews got to sit. 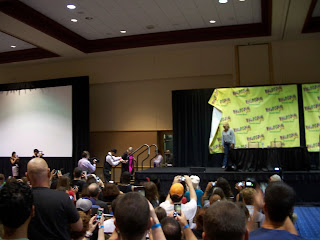 OMG OMG OMG She's entering!
(you can tell because everyone else is standing up and clicking away) 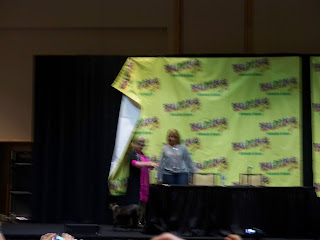 Trying to zoom!  Damn, getting blurry on my old digital camera.  Sometimes it gets good detail, other times... part of it is me, I'm getting too damn old to hold a camera steady. 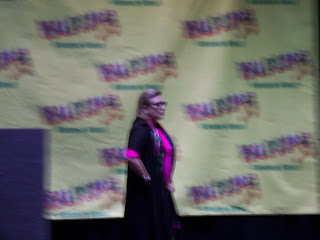 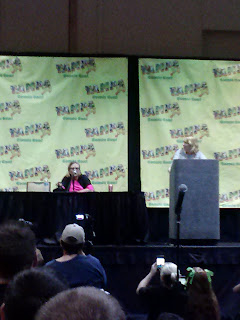 I switched over to my smartphone to see if the pictures would come out better, but unfortunately this is the closest I could zoom.  Sigh.

Carrie was a gracious guest speaker, snarky and knowingly prodding about the awe a lot of Star Wars fans have about the upcoming Episode VII: Force Awakens movie.  She didn't take any questions from the audience, she was booked for pretty much a whole afternoon of autographing and photo-taking elsewhere at the convention...

Pretty much everything else was walking the floor, checking out the vendors, and getting into lightsaber fights with Sith Lords. 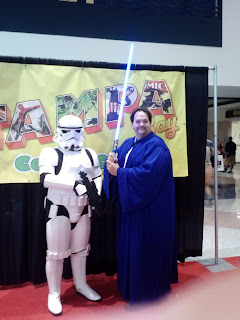 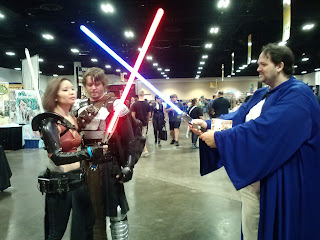 Hey, you all might remember this couple from last year's Comic-Con photo gallery.  They were the ones whom I saw with the LED-bright sabers that ooooh man I really wanted one for meself.  So thank ye for the inspiration. 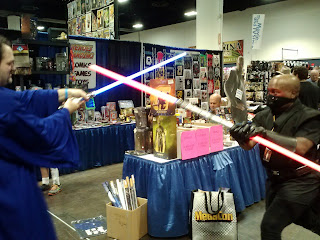 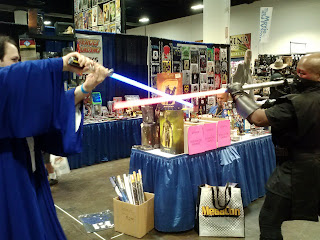 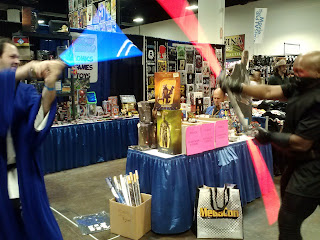 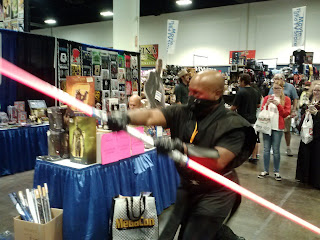 'Cause this guy knew how to wield a double-blade saber... 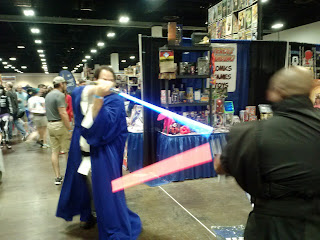 Only problem was I kept asking him to use Force Choke so my nephews could get a good action shot, and he apparently didn't hear me during the fight, so I had to end it with a Force Push move (THAT he understood, and played it well). 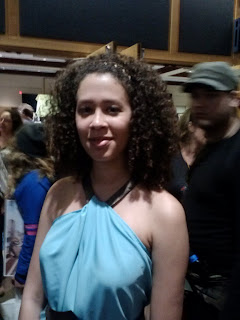 This is my former co-worker Briana at the Bartow Library, who had moved on to work in Tampa.  She came dressed as Missandei from Game of Thrones.  It was an excellent cosplay effort, and she really looked the part.  During the brief meet-up I had with her, she had three separate requests to get her photo taken.  THAT is a HUGE thing to happen to you at a comic-con: it means you've done a great job cosplaying.  (if you're wondering, no, I didn't get any requests for photos.  I had to request others.  Sigh...)

Speaking of cosplayers, I am always impressed by the ones who come up with a recent character design in what looked like weeks of prepping.  Such as this lady I saw during the morning line to get inside the convention center, dressed up as Joy from Inside Out: 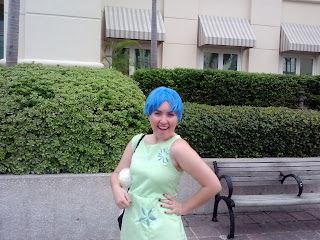 I saw later that her globe glowed yellow, as it should. 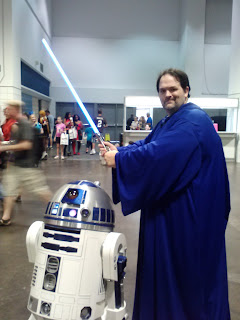 Always good for a convention: LOOK KIDS, IT'S R2D2! (Applause)

As a side note, my brother would have liked coming to the con: there were three different Jay and Silent Bob teams. 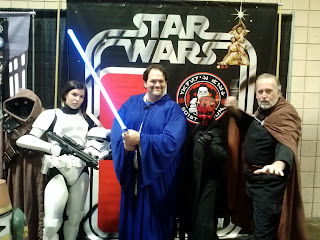 Didn't see the Mandalorian cosplay group here today, just the 501st.  Ah well.  If Count Dooku had a working saber I would have faced him... 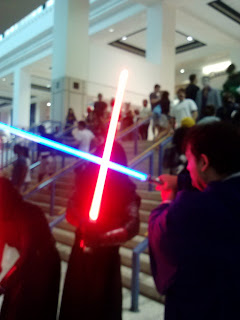 Oh, this guy had a working saber.  Be right back...

This time around, the convention was slightly easier to walkabout: the vendor and table areas were better spaced giving people excellent room to move back and forth.  There were a few narrow spots - noticeably between the Autograph area and the vendors area - but it wasn't as bad as last year, and not as bad as MegaCon's.  That said: There were a few decent spots for BENCHES to allow people some respite from all the walking, next time people, just plan it out, get a few benches going, all I'm saying...

Got to see JC De La Torre again, and author Glenda Finkelstein.  Missed running into Bill Hatfield.  Met a friend of my brother's - John Crowther - who got into the comics biz in Rochelle the Teen Cockroach.  Got to see some of the familiar artists and cosplayers. 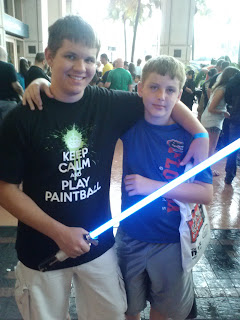 And here we are at the end of the afternoon heading out.  It rained hard at the convention center: all of Florida looked like it was getting socked in by a massive storm system.  The parental units for the nephews had to drive in as I was parked in the open and with little opportunity to get to the car.

I hope the nephews enjoyed the trip out this day.  I think Tommy found a toy or two for purchase: unfortunately, I still owe Andrew a present for his birthday (couldn't find anything he liked during the walkabouts)...
Posted by Paul at 7:04 PM