In 28 Days, We Vote For Real. In the Meantime, Here's Women Beating the Crap Out of Trump

I think I kept warning people about alienating the largest voting bloc in the nation. But nooooooo, the Republicans just HAD to keep ticking them off.

And now we're seeing the results in the polling. Per the Atlantic:

That’s the bad news for Trump. The worse news is that this poll likely does not include the full impact of a video, published Friday afternoon by The Washington Post, in which Trump boasts about sexually assaulting women. The poll was conducted Wednesday through Sunday, meaning some respondents were interviewed before the video’s release and some afterward. It also does not take into account the second presidential debate, in which Trump’s performance drew widely varying reviews (hint: the pundits liked it, the polled viewers sided with Hillary)...

...Clinton also continues to lead Trump by hefty margins among women, with a 33-point gap separating the candidates. Just 28 percent of likely women voters intend to pull the lever for Trump, a five-point drop from one week ago, while 61 percent plan to vote for Clinton. The lewd video of Trump might lead to an even greater gap in the home stretch toward the election.

Even more remarkably, Trump’s support has collapsed among white women without college degrees. Until recently, they formed Trump’s largest bloc of support. In 2004, they voted for George W. Bush by 19 points; in 2008, they backed John McCain by 17 points; and in 2012, they went with Mitt Romney by 20 points. This poll finds them evenly split between Clinton and Trump, with each drawing 40 percent support.

But while we’re in something of a wait-and-see mode, one demographic split caught my eye. That was from a Public Religion Research Institute poll conducted on behalf of The Atlantic. It showed a massive gender split, with Clinton trailing Trump by 11 percentage points among men but leading him by 33 points among women. To put those numbers in perspective, that’s saying Trump would defeat Clinton among men by a margin similar to Dwight D. Eisenhower’s landslide victory over Adlai Stevenson in 1952, while Clinton would defeat Trump among women by a margin similar to … actually, there’s no good comparison, since no candidate has won a presidential election by more than 26 percentage points since the popular vote became a widespread means of voting in 1824. To get to 33 points, you’d have to take the Eisenhower-Stevenson margin and add Lyndon B. Johnson’s 23-point win over Barry Goldwater in 1964 on top of it...


Silver then postulates what the numbers might look like on a map. If you just went with ONLY Women voting this cycle, the map would look like this:

The ONLY Men map goes the other way, obviously, with Trump winning...

So obviously the solution is we need more women voters.

Granted, polling does not equal actual results: You gotta play the game to see who wins. But the data leading up to Game Day is all pointing towards more voters turning away from Trump, and with voting groups turning in great numbers that suggest a nationwide trend. Meaning that most the states - where the Electoral College retains its power - are in play for Hillary, unlike previous election cycles where certain Red States would stay Red due to the Demographics no matter what.

As such, the Electoral College map we're looking at for November 8th should look like this: 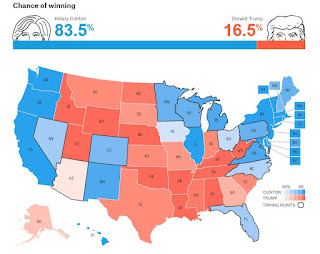 And the math is tight in places like Arizona and Georgia (and yes Texas) so this map is still a bit... conservative in predicting the Electoral votes. And there's also the bit about the Mormons finally in open rebellion against Trump's vulgarity. so there's a good chance Utah is a Toss-Up for once.

So barring massive voter suppression efforts - which hopefully doesn't affect enough states, and may not happen on large enough a scale if the Democrats' ground game is ready to roll - or outright refusal to vote, we should be looking at a massive Trump loss for the Presidency. If there's any justice in the world, Trump's sinking ship will be an epic enough collapse that it will drag enough Republican Senators and Congresspersons down with him. Which is looking likelier - even for the gerrymandered House! - by the day.

JUST GET THE DAMN VOTE OUT, DEMOCRATS.

Email ThisBlogThis!Share to TwitterShare to FacebookShare to Pinterest
Labels: 2016, are we there yet papa smurf, Don't Vote Trump, elections matter, get the vote out, october, polling, sober nate silver, women

Clinton trailing Trump by 11 percentage points among men.....Trump would defeat Clinton among men by a margin similar to Dwight D. Eisenhower’s landslide victory over Adlai Stevenson

This is what really astonishes me. The 33-point margin among women is really no surprise given Trump's record, but how can he still be leading among men? There can't be that many Confederate-flag Deliverance mutants out there, surely? Something to do with toxic leftover Neanderthal DNA on the Y chromosome?

It's very disappointing. You couldn't blame the women if they start thinking about some sort of reverse Nineteenth Amendment.

I don't know whether the 27% will actually do what they're threatening and fail to support the down-ticket Republicans as revenge for Ryan failing to show enough enthusiasm for Trump, but whenever there's a pie-fight on the right it's an opportunity for us. Now to pull the uncharacteristic (for Democrats) move and capitalize on our good fortune...
Susie Madrak is starting to get excited about all of this:

Do you know what the Trumpshirts are doing in response to that Nate Silver projection of how Women Only results looks?

They're hashtagging #Repealthe19th following the honorable tradition of wingnut Republicans threatening to take away the women's vote.

It's like they WANT the largest voting bloc in the United States - women - to straight up vote against Trump and every Republican on the ballots.

I also read that Eric Trump was using the male-only map in campaign literature to demonstrate Trump's "momentum".
Uh, there are more female voters than male voters. They do know that, right?

Din: A few Twitter twits have been using the male-only map and claiming it's the actual polling situation (removing any references that it is a male-only map). I've seen this. And some delusional Republicans are believing it.