The Revolutions Will Not Be Localized

Gets to you, doesn’t it? That’s what a reckoning sounds like. You want it to stop, but it just keeps coming. It’s when it stops, that’s when you’ll really want to start to fret.
-- Maarva (Fiona Shaw) from the episode "Reckoning" for Star Wars: Andor

I mentioned a few months back that Iran erupted into nationwide protests over the death of a young woman Mahsa Amini, who had been killed by authorities punishing her for improper wearing of the hijab.

The protests did not abate. Riots remain commonplace even as the Ayatollahs crack down harder on their own people. The protesters even went as far as to burn down Ayatollah Khomeini's museum/birthplace.

The Iranian government is escalating violence in the Kurdish regions, as Amini was Kurdish and her ethnic group isn't beholden to the religious extremism of the Shia leadership. Via Oliver Holmes at the Guardian:

A nationwide uprising has convulsed the country since the death in September of 22-year-old Mahsa Amini, who was allegedly beaten into a coma by the Islamic Republic’s “morality police” after they arrested her for wearing a headscarf they deemed inappropriate.

Since then, hundreds of people have been killed in a bloody crackdown on a popular revolt calling for an end to the decades-long authoritarian rule of the country’s top clerics.

Government attacks on rallies escalated at the weekend in predominantly Kurdish areas of Iran, with videos showing scenes reminiscent of a war zone.

Hengaw, a Norway-based rights group that monitors abuses, posted footage on Monday of what it said were state forces travelling to the cities of Bukan and Mahabad. The armed convoy included pickup trucks with mounted machine guns...

The Guardian article provided a map: 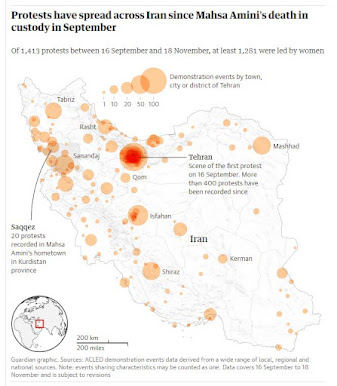 The protests are focused on the capital Tehran, but all those dots are everywhere in Iran. The frustration with the Islamic regime has been there for decades, and it's not going away:

Facing one of the boldest challenges to its hardline rule since the 1979 revolution that overthrew the western-friendly Shah of Iran, Tehran has shut down internet access in many areas. It has repeatedly blamed foreign enemies and their agents for orchestrating the protests and accuses “terrorists” of killing several dozen security force members.

However, the UN office of the high commissioner for human rights (OHCHR) said more than 300 people had been killed so far in Iran’s crackdown, including more than 40 children. These killings occurred across the country, with deaths reported in 25 of 31 provinces...

OHCHR spokesperson Jeremy Laurence said reports from mainly Kurdish cities were particularly distressing, with accounts of more than 40 people killed by security forces over the past week.

“Significant numbers of security forces have also been deployed in recent days,” he said.

“We urge the authorities to address people’s demands for equality, dignity and rights, instead of using unnecessary or disproportionate force to suppress the protests,” he added. “The lack of accountability for gross human rights violations in Iran remains persistent and is contributing to the growing grievances...”

These rulers, these religious extremists, cannot stop violating the rights of their citizens because they've never really cared for their citizens in the first place. All they cared about are the power and control, and Fear - via public displays of punishment and violence - was the only tool they have to keep that power and control.

Now the corrupt clerics in charge of this theocratic prison are going to test the limits of uprising again: To see if they can kill enough protesters to terrify the rest of Iran into submission, or if they run out of bullets first.

Iran's not the only nation coping with a restless and frustrated population. I woke up this morning to reports coming out of China of nationwide protests against the corrupt one-party rule there. Via Helen Davidson and Verna Yu also with the Guardian:

People opposed to China’s stringent Covid restrictions have protested in cities across the country in the biggest wave of civil disobedience on the mainland since Xi Jinping assumed power a decade ago.

Protests triggered by a deadly apartment fire in the far west of the country last week took place on Sunday in cities including Shanghai, Beijing, Chengdu, Wuhan and Guangzhou, according to footage shared on social media, in defiance of a series of heavy-handed arrests of demonstrators on Saturday night.

In the early hours of Monday in Beijing, two groups of protesters totalling at least 1,000 people were gathered along the Chinese capital’s 3rd Ring Road near the Liangma River, refusing to disperse...

This is more widespread than just Tiananmen Square. It's in a number of China's biggest metros:

The protests erupted on Friday in Urumqi, the regional capital of the far west Xinjiang region, after footage of a fire in a residential building that killed at least 10 people the day before led to accusations that a Covid lockdown was a factor in the death toll.

Urumqi officials abruptly held a news conference in the early hours of Saturday to deny Covid measures had hampered escape and rescue. Many of Urumqi’s 4 million residents have been under some of the country’s longest lockdowns, barred from leaving their homes for as long as 100 days...

Personally, I'm not entirely in agreement with what the protesters here are fighting against: COVID is still out there and the people do need to protect themselves from the spread of the virus. However, I do understand where the frustration is coming from: Here in the United States, we had numerous protests by anti-maskers and anti-vaxxers opposed to the quarantine restrictions we had here (which were never as severe as overseas). As a result, even two years (now maybe three) on since the outbreak, my own nation isn't even reporting on the severe uptick in COVID cases as we head into winter. There's pandemic fatigue everywhere, and everyone is struggling to abide by the safety rules.

But I may be wrong. Even global health care experts note that China's restrictions are pretty harsh even for their tastes:

China has stuck with Xi’s zero-Covid policy even as much of the world has lifted most restrictions. While low by global standards, China’s case numbers have hit record highs for days, with nearly 40,000 new infections on Saturday, prompting yet more lockdowns in cities across the country. Beijing has defended the policy as life-saving and necessary to prevent overwhelming the healthcare system.

Speaking to US political talk shows on Sunday, Dr Anthony Fauci, the outgoing director of the US National Institute of Allergy and Infectious Diseases, described China’s approach to Covid as “very severe and rather draconian”.

“A prolonged lockdown without any seeming purpose or endgame to it … really doesn’t make public health sense. In many respects it baffles me,” Fauci said.

The frustrations the Chinese people are feeling may be justified if their own government isn't working towards a more amenable - yet hopefully effective - quarantine policy. There is a tone-deafness in the leadership contributing to that anger.

There is also - at least in my reading of events - an underlying and unspoken problem at the root of the protests: Anger at how Chairman Xi has taken total control of the Chinese government for his own corrupt ends:

In an unusually bold act that appeared to indicate the level of people’s desperation, a crowd in Shanghai late on Saturday night called for the removal of the Communist party and Xi during a standoff with police, chanting: “Communist party! Step down! Xi Jinping! Step down!” Chinese people usually refrain from criticizing the party and its leaders in public for fear of reprisals...

Widespread in-person protests are rare in China, where dissent has been all but eliminated under Xi, forcing citizens mostly to vent their frustrations on social media where they play cat-and-mouse games with censors.

Just this October, Xi staged a takeover - complete with public removal of power-sharers and potential rivals - of the Chinese Communist Party that holds one-party rule over the mainland. He's essentially completed the process every autocrat/dictator performs en route to authoritarian dominance. As a result, everything that happens in China happens on Xi's orders. It now literally is all about him, and the people really didn't have much say it thanks to a government that offers no choices.

Xi may be talking about "fighting corruption" as he seizes full control of it all - not just the political but also the financial and social and spiritual well-being of China - but you need to remember Putin promised the same reforms for Russia and he turned his reforms into a massive shakedown that spread more corruption wherever he got his hand in. I can't be the only one who remembered that. I get the feeling the Chinese people remembered that as well, and are terrified by the same outcome.

So now we have a nation of billions rising up against a one-party communist regime ruled by hundreds that is giving orders to armies of millions to keep the billions in line. This is where we've seen it before - not just Tiananmen but also the Hong Kong protests eight years back - and it was bloody and shameful then and it will be again. The only difference is now all of China is rising up, and it's not a question of how soon the anger will ebb.

Now the corrupt despots in charge of this sweatshop prison are going to test the limits of uprising again: To see if they can kill enough protesters to terrify the rest of China into submission, or if they run out of bullets first.

I'm not repeating myself as a joke. History keeps repeating because the Cycle of Revolution just leads to the same dictators and crooks replacing each other. Something new needs to rise up in Iran, and in China, AND in Russia: To end the one-party corruption that has gripped those nations for decades in one form or another. A rebellion towards justice and moderation, towards open speech and better choices.

This is what a reckoning sounds like: Frustrated people unwilling to be prisoners anymore.

Iran is on unstable footing as most of the population was born after the Islamic revolution in 1979, and the old guys in charge can't do much to help the ordinary lives of the citizenry.
China is in a weird phase of rapid economic growth that usually takes decades but has outpaced even the one party rule's ability to adapt. Covid and Xi's lust for power just complicate the economic time bomb just ticking away.
The people will have their say, one way or another in both cases, and the sooner the rulers acknowledge that, the easier they will have it when the reckoning arrives for them.