(Update: hello again, Crooks and Liars readers linking in from Mike's Blog Round-Up. And as always, thank you Batocchio for the link!)

It's not just the unpopularity of the two leading candidates - Donald Trump or Ted Cruz - among the general electorate. The Republicans are about to lose on the issues as well. 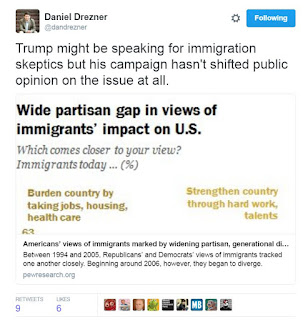 He links to a Pew Research poll on immigration as a topic, and the results were mind-blowing.

The numbers who view immigrants positively have gone up the last four years to 59 percent, with those viewing immigrants as a burden and job-takers sinking to 33 percent.

Along party lines, Democrats are clearly in favor of immigration while Republicans still only show over a third of their membership in favor (that means two-thirds of Republicans do not view it in a positive light).

That means whichever party is OPPOSED to immigration reform is going to have a rough go of it winning over 60 percent of the electorate.

While Trump's made the most splash promoting that damn wall of his - which the Pew Research notes is massively unpopular - the key thing to note about this Presidential cycle is how the whole Republican Party platform had been and remains fervently anti-immigrant. There's been other issues at the debates - which foreign nation to bomb, which tax cut to favor, which schools to close, which social safety nets to slash - but nearly every GOP candidate had come out hard against immigration. Even the ones expected to "play nice" on the topic - Jeb Bush and Marco Rubio and Cruz just on personal connections to Hispanics (a key ethnic group affected by this) - had to avoid the questions or come out opposed to any kind of reform solution for our current immigration issues.

Look at this poll regarding that Trump Wall: Both Cruz and Trump supports favor building up border defenses (costly and won't work), numbers which go against that top Overall Voter number showing two-thirds of the nation oppose such a plan. Kasich's supporters are currently showing as the most pro-immigration of the remaining GOP candidates, but even HE can't shake the fact his party is adamantly against reforms on this (also, he's in no position to win the nomination right now: he's merely in it to keep Trump from winning delegates outright).

Trump's made so much noise pushing that Wall of his, it won't matter if it's either Trump or Cruz winning this July at the Cleveland convention. The entire GOP is in trouble if they campaign at a national level against immigration reform (among other issues that will turn the general electorate against them). The problem will be one of degrees: if it's Trump they'll lose everybody, if it's Cruz they'll lose MOSTLY everybody.

The Republicans have been so vocal against immigrants that any attempt to shift back to the center on this issue would be greeted with disbelief and disdain.

What other issue can the Republicans honestly run on that would counter the votes they'll lose over immigration reform? Their "tax cuts for the rich" plan will not find a safe haven this year of anti-Establishment anger. If they think running against gays and transgender will win over voters, they're wrong. The Republicans do not have a sane foreign policy platform - "Bomb ISIL" "Boycott China" and "Nuke Iran" are not winning stances with moderates/centrists who prefer working with allies - at the moment.

If Republicans think "repeal Obamacare" is going to impress anybody, it's only going to get their own voters nowadays. Have you noticed ANYBODY making noise about repealing Obamacare lately? That hasn't been a major topic: we've gotten to the point where the fight to repeal it has fled to the fringes.

No, let's be blunt: Immigration has been one of the top three issues of this 2016 election cycle, and the Republicans are poised to lose big because of their opposition to it. Maybe not with the House elections, but definitely with the Presidential race, and likely with the Senate races in EVERY state - even Red ones - where pro-immigration forces are in play.

In America, immigration is like grade school: once you've been here for a while and people are used to seeing you around, they don't pick on you as much, and they expect you to help them pick on the next new arrivals.
Thankfully, this isn't as true as it used to be; the same awful jokes aren't as likely to be recycled with a more recently arrived ethnicity as their punch line. This progress is sort of weeding out the casual from the hard-core racists, making it less prevalent, but far uglier (and just as dangerous as it has ever been.)
I don't think the explicitly racist white vote can win national elections any more, but I also don't think that they'll give up trying any time soon. It's like Jon Stewart said: "Come on, people, you can see where this is ends, the same place it always ends in this country..."

I'm coping with an anti-immigrant hater on Twitter right now. Every time I bring up the positive aspects of immigration for our nation's history - that we can have open borders if done right - he just blows me off and asks for context or dismisses my view as "multiculturalism". Even as I point out to him that HE is the answer to what immigration can be for the US. HE is the son of immigrants - we are all - and it can be a good thing.

I'm at the point where I'm mocking him over taco upgrades. This will not end well.

They are on the wrong side of the inexorable development of society.. Not surprising for a movement which once defined its role as "stand athwart history, yelling STOP".

Trumpism is a last-ditch effort to reassert the rule of a shrinking minority -- which makes it all the more important, as you've said several times, to get out the vote! We must make sure that the numbers this poll reveals are translated into actual political results.

I mean, we've got 78 percent and climbing of Democrats thinking that immigration strengthens us as a nation, and there's the Republicans stuck at 33 percent thinking that way. And the overall national view is 60-64 percent pro-immigration when you look at the numbers, which tells me a lot of independent voters are how the Democrats are. How can the Republicans think they can win more people over to their side of the argument when the audience is already against them?

That guy on Twitter I was arguing against broke out that old fear-monger story about terrorists sneaking in through the Mexican open borders. I pointed out that's barely a hundred or so "terrorists" opposed to the hundreds of thousands of honest people coming to our land to BE here for real, to work, to live without the threat of violence and death in other lands, and partake of being American. We're supposed to make millions suffer all because of the fear of a handful of a-holes? We have law enforcement working already to stop those terrorists already: we don't need the excuse of building a wall and deporting millions of families just to soothe the fear of The Other.

We have more to gain from an open border with sensible immigration policies and reforms than closing everything down and hunting families like animals for deporting. That's unconstitutional, un-Christian, and insane.

This reminds me of the last verse to an Indigo Girls song: