What If Cruz Is Worse At the Electoral Math Than Trump?

Well, the thing is Ted Cruz isn't bad at campaigning for the Presidency. He has an effective organization that just happens to be doing all the heavy-lifting of getting control of the state delegations, playing the long game of a possible contested convention where whomever REALLY controls the delegates wins the second ballot.

Where Trump - and everyone else - is or was playing for the whole ballgame of winning primary delegate counts outright, Cruz saw the landscape shifting towards the convention and got his ground teams to win the behind-the-scenes un-glamorous jobs of actually serving on committees and the delegations. He's putting into play the actual people who serve as delegates: not people in the abstract but those who will be free to vote how they choose if the first ballot fails to select the winner. For all the talk about a White Knight candidate showing up from behind the curtain, the reality is that Cruz could win despite being second-best.

And even though Cruz could win out, the whole game for the GOP could still be tossed into the dumpster fire. As Infidel753 points out at his blog:

If Cruz takes the nomination on the second ballot, thwarting both Trump and the bosses who had planned to impose a hand-picked nominee like Ryan or Romney, the party will be left even more divided and confused than if the bosses had won.  The Trumpanzees Trumpshirts (sorry, Infidel) (and Trump himself) will be just as outraged at the nomination being "stolen", while the leaders may well balk at uniting behind a man whom they loathe and who cannot win in November.  They could end up split into three hostile factions instead of two.

Cruz, in his way, is just as dangerous as Trump, and just as doomed in November.  He's simply this cycle's Christian Right candidate, the avatar of the Bible-thumping, snake-handling, tongue-speaking element which has been growing in influence within the party for years.  He doesn't play well outside of that constituency; much of the support he's attracting now is really anyone-but-Trump sentiment...


I've posted before about Cruz's weaknesses as a candidate, and I've suggested earlier how bad a Cruz win would look in November. How factual are those warning signs? Can Cruz be as bad or worse to the general electorate the way Trump could be?

Don't forget that Cruz's favorability numbers are almost as bad as Trump: it's hard for a candidate to be over 50 percent Unlikes to do well in a general election. Thing is, it's not as bad, which gives Cruz in theory even odds in a campaign against Hillary (whose Unlikes are also over 50 percent).

It all depends on how the non-party ideologues voting in November are gonna lean.

Will the independent voters - will the moderate voters in both (still) parties - be won over by a Ted Cruz whose overt Christianity - a form called Dominionism - is on the far end of the extremist scale?

Will those independent / moderate voters - the ones who prefer political competency and effectiveness - be won over by a Cruz whose been the major obstructionist player in Congress the last three years?

There's signs there are enough Republicans who won't support Cruz as the nominee because of what he represents: the most extreme Far Right conservative candidate the party would yet have for the White House. Even Goldwater wasn't as documented as extreme.

And Goldwater got his ass kicked back when being a Far Right Conservative meant something. 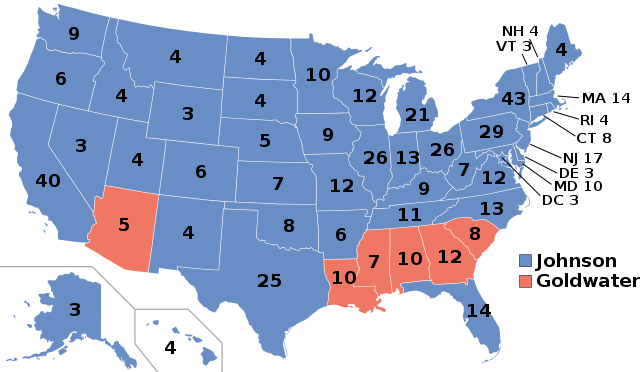 Cruz will only appeal to certain types of voters: the Anti-Establishment Republican base, which is currently older white males with little education; and the Protestant Evangelical religious voters who are keyed to the belief of End Times and the Rapture. In most other categories - immigration, tax cuts, bombing foreign nations - he's playing to the GOP base same as Trump, but will find it hard to convince the general electorate to believe him if he switches gears and pretends to play nice.

'Cause Cruz already has a reputation for not playing well with others. And the general voters want to see that in their potential leaders: this was Obama's winning grace over Hillary in 2008, that he positioned himself better as a conduit for Change able to work with others. That was McCain's main appeal in 2008 (which almost worked in an election cycle where the Republican brand was mud) as well, as was Dubya's in 2000 and so on.

To be fair, I doubt Cruz will lose as many voters the way Trump will in November: there are entire states that are horrified by Trump the man as much as Trump the Candidate, which will skew the normal voting for the GOP downward.

But I don't see any signs Cruz will improve performance for Republicans over Romney's failings in 2012. Cruz's overt ignorance and smarmy lack of charm denies Republicans the hope of using a congenial figure to win voters back to them. Cruz's hard Right campaign would be a more difficult sell to a nation that wouldn't buy what Mitt was selling.

I have seen a post or three about how the liberal progressive bloggers and pundits are actively hopeful that Cruz wins the nomination and faces it alone against Hillary/Bernie in November. There's the belief that the Republican faithful have kept telling themselves that they would win the Presidency if only their candidate was a TRUE Conservative (McCain and Romney and Dubya all labeled as frauds).

Well, actually, they will keep lying to themselves, 'cause they've got nothing else to cling to. But they'll definitely be screwed as a national power, because how further Right can the Republicans go if even Cruz fails them?

Just think of the Red states Trump won as a Primary candidate: those will likely NOT go for Cruz, even if the party response is supposed to line up and be good soldiers. If Trump doesn't run as a Third-Party candidate, those states become toss-ups and Hillary could grab three or four or nine of them while Cruz holds only the Red states who sided with him. The states to flip Blue are likely Georgia and North Carolina, maybe Arizona and Tennessee and Mississippi and Missouri. 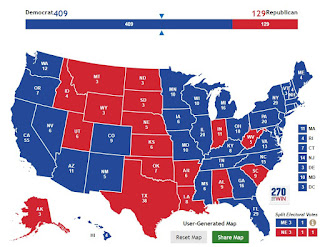 It won't be a deep electoral defeat the way Trump's will be - I've got Trump winning at BEST eight states - but it'll be serious, and a possible sign of cracking up the solid Deep South votes that have been reliable conservative counts for the last four decades.

The only question would be how badly Cruz might affect the down-ballot votes: it is possible Cruz would adversely affect the Senate races - he'll have a tough time campaigning alongside colleagues who will be fighting the urge to punch him in the face - to where the Republicans lose control, but in a Cruz campaign the GOP may well hold onto the House.

This will explain why the RNC is likely going to hold its nose and embrace Cruz at the same time. It gives them some kind of hope to stave off a possible Democratic landslide.

Which is why it's still so very imperative for Democrats and moderates to get the damn vote out this November!

Email ThisBlogThis!Share to TwitterShare to FacebookShare to Pinterest
Labels: 2016, campaigns, elections matter, primaries, republicans are incompetent, ted cruz can suck it, trump is a con artist, what if