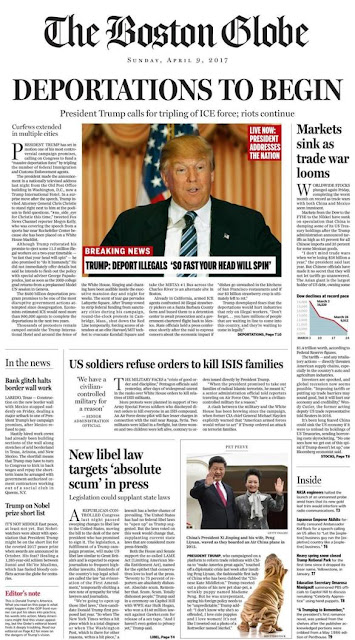 So there's a kerfuffle over this past weekend when the Boston Globe decided to take Donald Trump at his word and projected what it would like if Trump became President:

It is an exercise in taking a man at his word. And his vision of America promises to be as appalling in real life as it is in black and white on the page. It is a vision that demands an active and engaged opposition. It requires an opposition as focused on denying Trump the White House as the candidate is flippant and reckless about securing it...

If you can't read the print or can't enlarge the image, click for the PDF version here.

And lemme just note how they have Trump's administration falling apart by April 2017:

And those are just the major articles. There's sillier side notes about how Trump's influence on everything else in government is making things bizarre/weird/self-destructive, but you get the idea.

Thing is, I dunno why everyone's making a big deal out of the Boston Globe writing up this satirical take on Trump's own outlandish campaign promises and how such promises would be actively implemented in the Real World.

'Cause I've already been here and done that, months ago:

...Okay, deep breaths. Try to remember this is just a game, we're just trying to figure out how this could play out. It hasn't really happened. We're just thinking it. Just in case. Don't Panic. Settle. Breathe... breathe... Okay, you good? Okay.

So, what exactly would we expect to get on Day One of a Trump administration?

We'll get an immediate response by November 9th before Trump even gets into the Oval Office. Because I get the feeling Mexico is going to recall their ambassador and kick ours out of their country as soon as humanly possible...

...Day One itself is probably going to look like this: Trump issues an Executive Order suspending ObamaCare until Congress acts on "repealing and replacing" it. Given that Congress under Republicans - who likely will remain in power in this scenario - so far has a repeal in mind but nothing to replace it, that will likely mean millions on Medicaid coverage and hundreds of thousands on federal-level exchanges are sh-t out of health care luck.

Day One will also include Trump introducing a Republican Cabinet made of up of some of the nastier remnants of the Bush the Lesser administration - neocons in foreign policy, tax-cutters and deregulators in domestic policy - still eager to re-establish the bad habits and disasters of 2001-2009 they never answered for...


Granted, I never delved into the economic catastrophe that will take place when Trump tries a trade war against China, but otherwise I was predicting a lot of the same disasters that the Globe is predicting.

Man, I'm feeling like I'm five steps ahead of everyone here. I'd been wondering about the possibility of a contested GOP convention - and how screwed the Republicans were no matter what - well before anyone else had. I'd been thinking about the importance of the women's vote years before it's turning into a serious problem for the Republicans now. I'd been right about Rubio tanking in spite of all the Beltway cheerleading, and how the Establishment can't see how they've lost their own voting base to outrage and fear.

To quote the Bard: I FEEL LIKE I'M TAKING CRAZY PILLS!


You all are playing checkers while I'm breaking out the chessboard.

And for the Love of God DON'T VOTE REPUBLICAN.

Update 8/21/16: Well, hell. Someone did beat me to this. Jon Lovett in the Atlantic posted this a year ago well before I did a What If? proposal. He wins.

Email ThisBlogThis!Share to TwitterShare to FacebookShare to Pinterest
Labels: 2016, are we there yet papa smurf, media, Republicans are insane, trump is a con artist, what if